This probably isn’t a cold, allergy or bizarre personal affectation. The Donald has a problem: he isn’t getting enough oxygen to his brain. I know it may sound like I’m making fun, but I assure you: my professional principles supersede my political affiliations. I’m legitimately concerned for the guy.

The human breathing apparatus is comprised of these tough hombres right here: The big flat one inside the rib cage is your diaphragm. When you exhale, the lungs begin to deflate and take up less space. The diaphragm moves up into the chest cavity, filling up that space and storing up a little elastic tension for the following inhale.

When the inhale begins, the rib cage is in a narrow, high-pressure position that looks like this:

The act of inhaling releases some of the pressure inside the ribcage so that the air pressure outside the body pushes air into the lungs.

Here’s where things get tricky: our ribcage, shoulders, and spine are surrounded by muscles doing other jobs besides breathing. One of those jobs is maintaining your posture, and the type of posture a person adopts slowly changes the “resting” positions of their bones, including the ribcage.

One posture type that’s particularly awful for breathing is the “barrel-chested” posture. This occurs when the legs and hips aren’t strong enough to carry the weight of the body effectively, and the muscles of the upper body—the back muscles in particular—have to work overtime to keep things moving. At first, these overworked muscles get tougher: so tough, in fact, that they begin to lift and spread the ribcage to the point where it never gets a chance to come back down.

As this person ages, those overworked muscles give out, losing their elasticity and locking up. The legs and hips, weakened from years of compensation, can’t take the load; the abdominal wall has become powerless to pull the displaced ribs back down. The body begins a slow pitch forward, characterised by an exaggerated curvature in the middle (thoracic) spine and a wide, flared ribcage. The person’s head shifts forward as the body tries to balance itself, using the weight of the skull to counter the ballooning volume in the torso. It looks exactly like this: So why the sniffing? When Donald exhales, his posture stops his ribcage from moving down enough to empty his lungs of air. Dead, deoxygenated air remains in the lungs taking up space—and he starts each inhale with his ribs flared open.

The diaphragm is already stretched to its maximum, and there’s precious little pressure inside the chest cavity. So, what’s a fella gotta do to get some oxygen?

You guessed it: sniff.

Sniffing dramatically reduces the size of the airway through which air is entering the lungs. This artificially increases the air pressure entering the body and creates enough pressure differential to encourage the air outside the body to find its way in.

While it gets the next breath to happen, it’s a losing battle. Every breath gets harder as the ribs flare, the diaphragm weakens and the airway shrinks to avoid suffocating. It is both exacerbated by, and an indicator for, abnormally high anxiety. 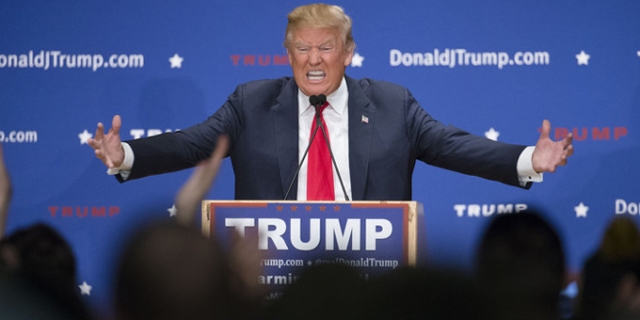 Mr. Trump: should this article reach you on the campaign trail, feel free to pop by Portland for a session. I have a strong suspicion that, if you could just take a few full breaths, we all might be a little happier.