About a week ago I gave a webinar for the Evidence-Based Fitness Academy entitled The Asymmetrical Advantage.

If you didn’t get a chance to watch live, no worries, it’s archived here:

If you can’t watch right now, the short version is that most of the force that allows our bodies to do all the super cool stuff that our bodies do is stored in the transverse plane of motion. We coil. We uncoil. We move.

So, rather than having a left and right side stitched together up the middle, our musculoskeletal system operates more like a pair of intertwined helixes, passing force from joint to joint with the same kind of tensile geometry as the weave of a Chinese finger trap. 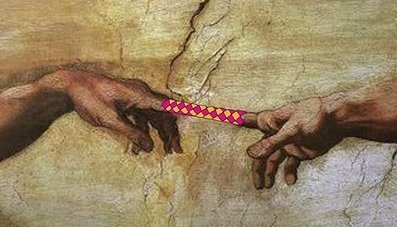 And the Lord said “let them store gravitational acceleration using a modular biaxial braid composed of tissues with a high variance of elastic properties!” And lo,  they went forth and did Parkour and salsa dancing and He saw that it was good.

We did a live Q&A at the end of the talk and I promised to post a couple videos in response to the following question:

How do you solve [this problem] as it relates to force improperly leaving the knee?

The prediction for the dominant side is that the foot spends too much time unloading and not enough time loading; biomechanically, this means that the tibia spends more time laterally rotating than medially rotating. This is dangerous because stable flexion of the knee requires the tibia to be internally rotated relative to the femur. If it isn’t, you can either count on super tight quads and hip flexors desperately trying to decelerate knee flexion or you can tenderly kiss your meniscus goodbye. More discussion on that here.

Of course, telling someone “internally rotate your tibia more” will probably land you little more than a confused, frustrated stare. So, I do it for them:

After doing the above treatment 4 or 5 times, I will then cue the patient to stand naturally and describe the difference in the way standing feels. The response, pretty much universally, is that the dominant foot feels “flatter” or “more grounded.” This is a result of the increased eversion associated with internal rotation of the tibia.

The goal for them, at the point, is to try to recreate that sensation of being “grounded” in other contexts.

Dysfunction in the non-dominant foot, contrary to its contralateral counterpart, often stems from spending too much of the gait cycle loading; when the time comes to unload, however, the ground reaction forces that should be passing through the knee and contributing toward propulsion instead get “stuck” in the tissues of the lower leg, typically as a result of incomplete knee extension and weak or limited internal rotation of the non-dominant femur.

Essentially, most the power generated through eversion is getting routed right back to the ipsilateral anterior compartment as forefoot supination, which, for these keeping score at home, just cancels itself right the hell out.

Like this, only with less humour and more ACL reconstruction.

So, I introduce a little manual forefoot pronation, and then cue what inevitably feels to them like an enormous amount of work in the vastus medialis. When you’ve been trying to extend your knee only using three of your four quads for most of your life, switching on number four feels like being asked to lift a truck.

As noted in the video, many patients will keep trying to revert back to that anterior compartment forefoot supination mentioned previously. I find that putting a little pressure on the distal end of extensor digitorum longus and continually harassing them to relax their foot usually does the trick.

A Word of Caution!

The techniques discussed are of my own design and are the product of nearly a decade of hands-on experience. Please don’t rush into any kind of new manual manipulation; proceed with care and above all remain observant and attentive to your client.

As always, feel free to leave your experiences in the comments!

One Response to “The Asymmetrical Advantage: Techniques”